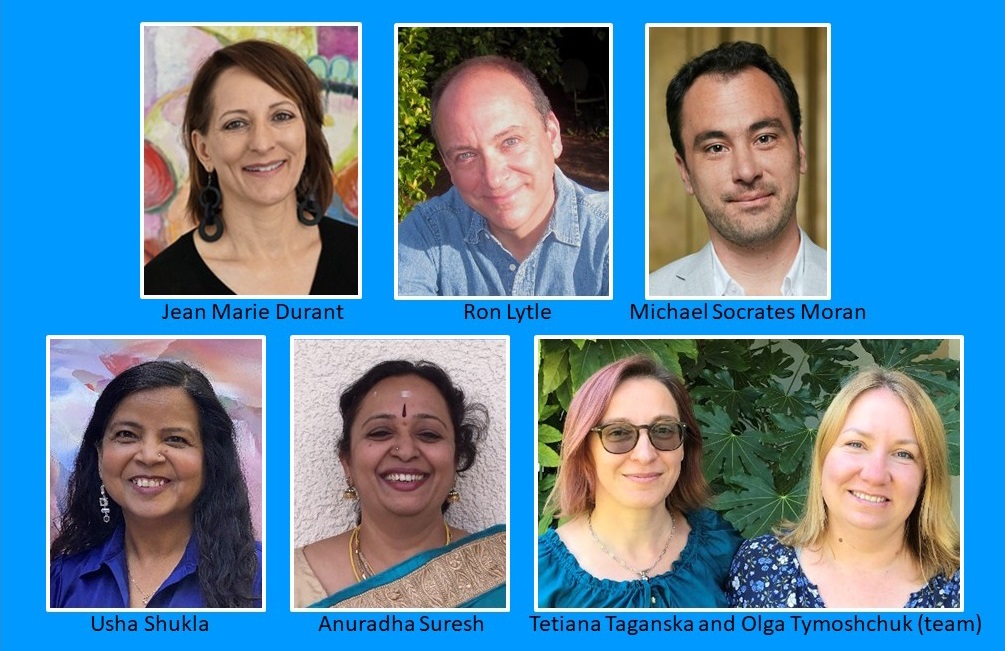 Alameda County is pleased to recognize 2020 Arts Leadership Award Recipients for their achievements and contributions impacting the arts community and residents of Alameda County. The seven recipients are Jean Marie Durant, Ron Lytle, Michael Socrates Moran, Usha Shukla, Anuradha Suresh, and the team of Tetiana Taganska and Olga Tymoshchuk. On October 20, 2020, the award recipients were honored by the Alameda County Board of Supervisors with commendations presented in conjunction with the County’s celebration of October as National Arts and Humanities Month. Each year the Members of the Alameda County Arts Commission review nominations submitted by the public and then select the award recipients. The Alameda County Arts Commission acknowledges all of the nominees for their leadership in the arts and serving as role models to others. 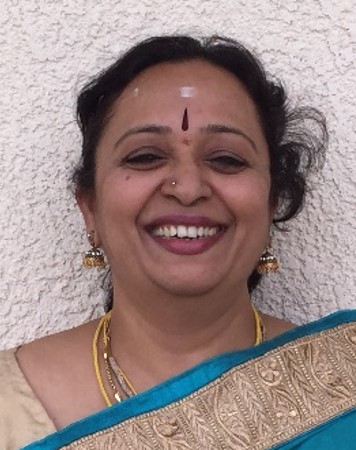 Anuradha (Anu) Suresh of Fremont is the Founder and Director of Shruthi Swara Laya, a School for Indian Music and Dance in Fremont that was established in 1998. Anu received her Master in Art in Carnatic Music from the University of Silicon Andhra, Milpitas, California and specializes in South Indian classical music known as Carnatic music. Through music classes and workshops, Anu emphasizes technical training and inspires a love for the underlying meaning and rich cultural context behind Carnatic music. Anu has touched the lives of thousands of students and community members through her music school, performances, and volunteer activities. As an acclaimed Carnatic musician, Anu has won several awards and recognitions. For four years, she served in various roles at South India Fine Arts (SIFA). As President at SIFA, she enabled Bay Area residents and Carnatic music students to learn from visiting professional artists. She is a Board Member of the Fremont Cultural Arts Council and serves as the Internship Program Coordinator. As a mentor and role model for her students and interns, Anu emphasizes the importance of community involvement. She trains interns to work on various Fremont activities such as the local Juried Photo Contest, Flash Fiction Writing Contest, and other programs. 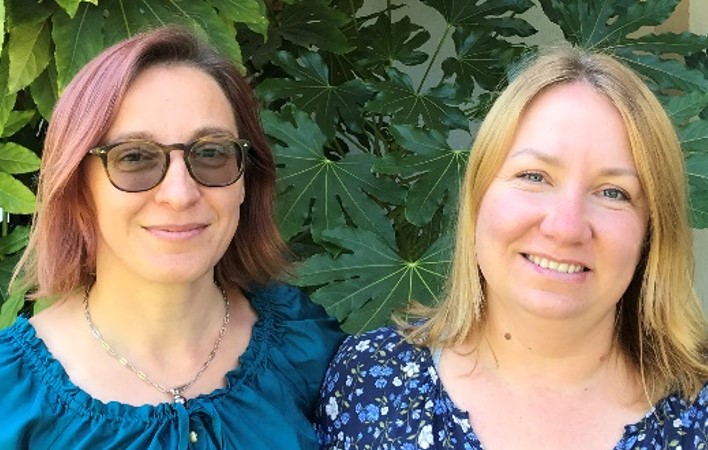 Tetiana Taganska and Olga Tymoshchuk (joint award), are Co-Founders and Co-Directors of Imaginook, a creative art studio and community space in Newark. As art instructors at the studio, they provide year-round art classes for children and adults, youth summer camps, and student art exhibitions. Imaginook also provides studio and workshop space, master art classes, exhibitions and events for artists in Newark and the neighboring cities of Fremont, Hayward and Union City, enhancing and providing a positive impact on the local art community. Tetiana is on the Board of Directors of the Fremont Art Association and taught art classes through the organization. She studied fine art at Svyatoslav Brakhnov’s Atelier in Kiev, Ukraine, and has a degree in applied mathematics. She is an impressionist artist whose artworks have been featured in a number of exhibitions. Olga is on the Board of Directors for Odyssey of the Mind, a K-12 program focused on imaginative problem-solving activities. Olga has a masters degree in corporate management and a certificate in ceramics. She is an artist who is focused on painting, sculpture and ceramics. Both women have volunteered regularly in the arts, including the Fremont Cultural Arts Council’s Maker event, as well as Ohlone College’s “Ohlone Makes” event. They both judge art for the PTA Reflections school arts program. 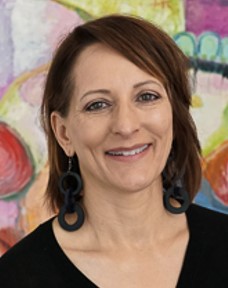 Jean Marie Durant of Oakland is the President of Oakland Art Murmur (OAM), a volunteer run, nonprofit, arts organization that supports Oakland artists and art spaces by connecting the public to the art of Oakland. Jean has been an OAM Board Member since 2016, and Board President since June 2018. As Board President, Jean has shaped the current direction of OAM’s vision of bringing the local community to the art of Oakland by focusing on Oakland’s artists, visual arts galleries, creative spaces and alternative venues. Jean works to generate and maintain local and national public awareness of Oakland’s art community by hosting and sponsoring events such as Oakland Art & Soul, Oakland Pride, First Friday Art Walk, Saturday Stroll, and Art Route Oakland. Jean is instrumental in creating new programs such as the Oakland Originals Artists Profile Series which highlights Oakland’s diverse artistic community and new tools such as an online center for Artists Resources. In response to the pandemic, she is organizing programs that help drive Oakland’s creative economy, such as The Storefronts Initiative which utilizes empty storefronts to display art. This project features Bay Area artists and includes stipends and exposure for artists during a time of crisis. 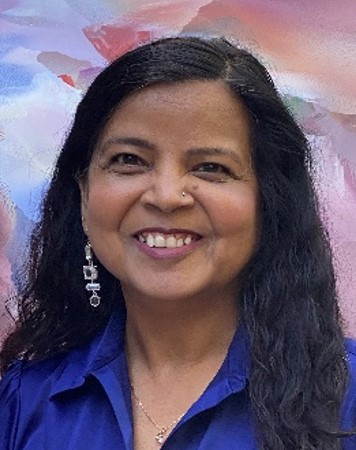 Usha Shukla of Pleasanton is a full-time professional artist who works out of her studio in Pleasanton creating vibrant, nature-inspired abstract paintings. For almost a decade, she has been an active Member of the Pleasanton Art League (PAL) and Livermore Art Association. Since 2016, she has served as a PAL Board Member and as the Chairperson of the PAL Art Circuit, a program which presents artworks by local artists at Pleasanton businesses and other Tri-Valley venues. Under Usha’s leadership, the Art Circuit has grown and now includes 32 artists exhibiting at eight changing locations. Usha also serves as the Treasurer of the National League of American Pen Women, Diablo/Alameda Branch. For the last two years, she has served as a juror for the National Congressional High School Art Competition for Congressional District 15, represented by Eric Swalwell. Her artwork has been featured in solo and group shows at various locations in Alameda County such as Pleasanton’s Firehouse Arts Center and Museum on Main, the Hayward City Hall, and Sun Gallery in Hayward, as well as the Bankhead Theater in Livermore. Usha completed public art projects for the City of Dublin, the City of Livermore, and the County of Alameda with artworks placed at the East County Hall of Justice in Dublin. 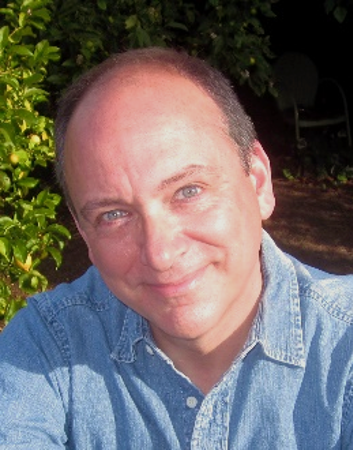 Ron Lytle of Emeryville is a Freelance Writer, Composer-Lyricist, and Resident Musical Playwright with East Bay Children’s Theater (EBCT), the oldest continuously-operating theatrical troupe in the Bay Area. EBCT brings free live musical theatre to Title One elementary schools throughout Alameda County and the East Bay, reaching approximately 9,000 elementary school children each year. To date, Ron has debuted twelve original musicals with EBCT. Ron’s shows promote messages that encourage diverse audiences of children to believe in themselves and explore their own creative abilities. His melodies, lyrics, and scripts delight children as well as teachers and parents. The quality of Ron’s work attracts a new and diverse generation of performers and designers to the company. Under Ron’s leadership, EBCT grew beyond its original touring model and now has an expanded schedule of public performances to raise funds for the school shows while enhancing EBCT’s profile. EBCT’s world-premiere of Ron’s successful holiday spectacular, CHRISTMAS IN OZ, brought the company’s troupe an infusion of new talent. When the pandemic curtailed EBCT's 2020 season, Ron worked on plans to stream interactive video musicals into East Bay Title One schools and children’s hospitals. Ron’s other works are performed throughout the United States, as well as England, Australia and Canada.

Michael Socrates Moran of Oakland is the Co-Founder, Co-Artistic Director and Executive Director of Oakland Theater Project, formerly known as Ubuntu Theater Project. Oakland Theater Project a professional theater company based in Oakland, dedicated to inspiring compassion across socio-economic and racial barriers. Michael worked as a professional actor in regional theaters in Chicago, Boston, San Francisco and at an off-Broadway house in New York City. He graduated from UC San Diego’s world-renowned MFA Directing program and directed over 15 productions at Oakland Theater Project. Whether it is leading a multi-racial, multi-cultural production of Death of a Salesman or a World Premiere, Michael pushes his company to look at all stories with compassion, through social and political inclusion, and critical investigation. Over the last five years, the Oakland Theater Project received numerous awards for outstanding artistry and best production with the San Francisco Bay Area Theater Critics Circle, Theatre Bay Area awards as well as wide-spread critical acclaim.